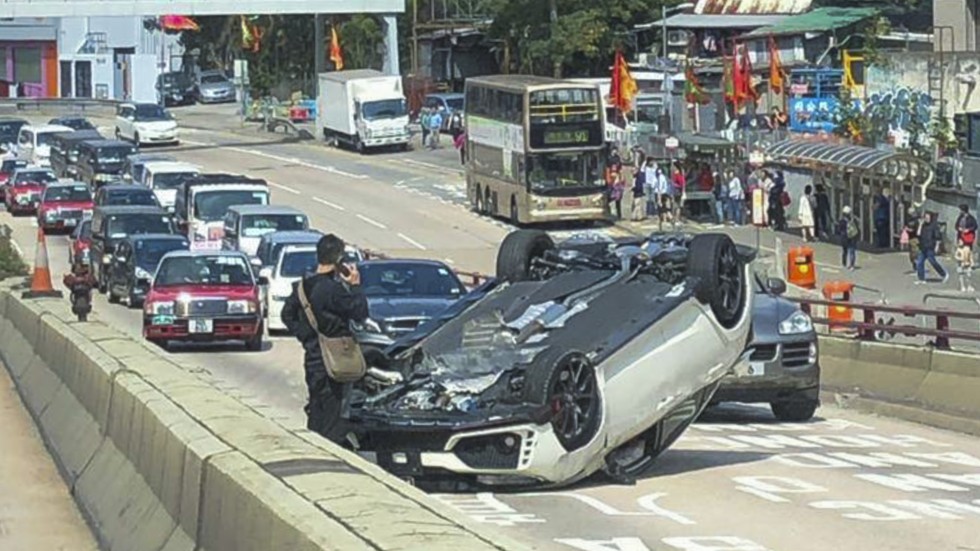 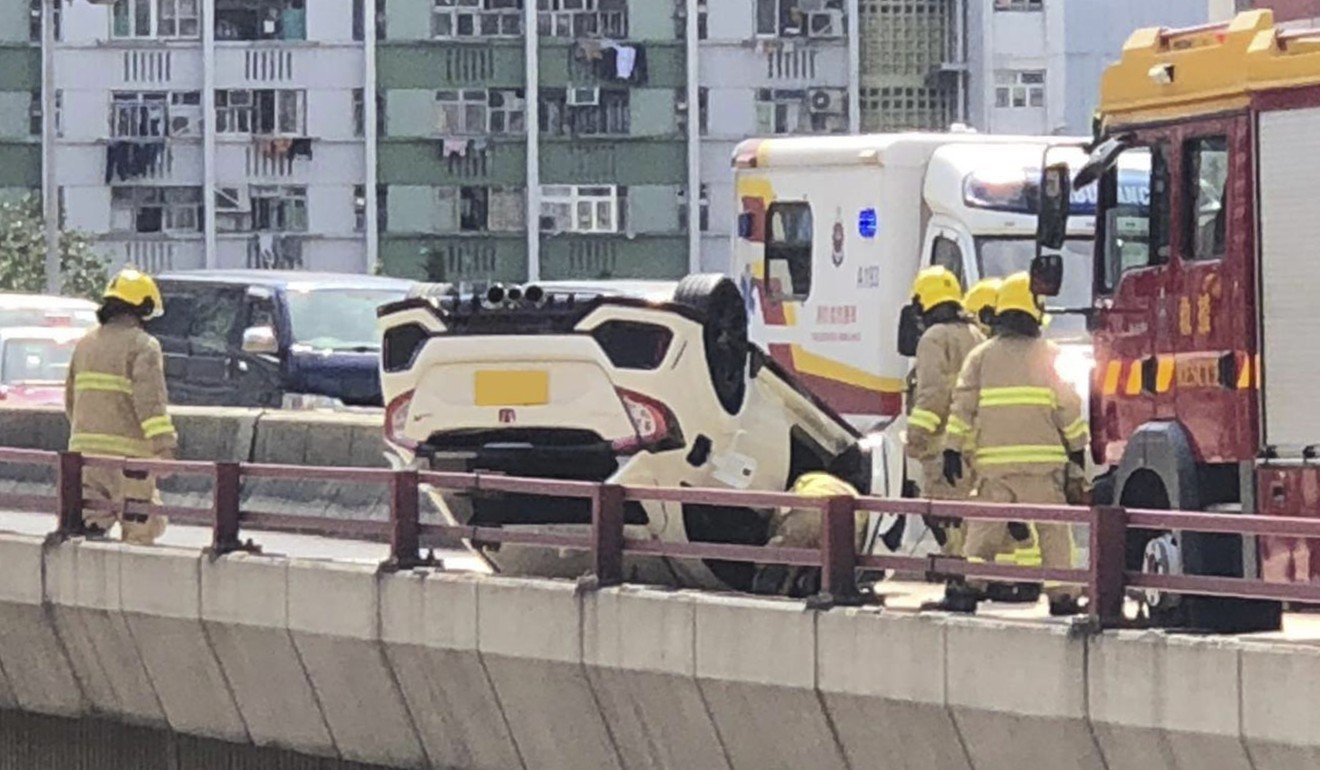 A motorist escaped unscathed when his car hit a kerb and overturned on a flyover in Hong Kong on Tuesday. He was travelling along Lung Cheung Road in Choi Hung at the time of the crash, shortly before 12.30pm.

A police spokesman said the driver was uninjured and was one of several callers who reported the incident to the force. The government’s Transport Department said the fast lane on the Kwun Tong-bound section of the flyover had been closed, but reopened before 1.45pm. Separately, officers were searching for the male driver of a Volkswagen car after it rammed into three vehicles in Aberdeen at 2.40am.

The three vehicles – a minibus, a taxi and a truck – were parked on Aberdeen Main Road. None of the three was occupied at the time of the crash. Police said the man, who was wearing a beige top, abandoned his car and fled the scene.

Dicky Cheung gains a lot in popularity following his role as  Keroro in TVB's "The Learning Curve of a Warlord". Last Friday was his 54th birthday. His good friend William So's wife Anita Fung arranged a birthday party celebration for him. All his friends included Eason Chan, Edmond Leung, Stephanie Che, Hilary Tsui etc were all there to wish him a happy birthday. His birthday cake has got "Happy Birthday 大帥哥" written on it. In the party, Dicky was seen holding Stephanie's son Justin who was eyeing at the birthday cake. Standing next to him was  William So's son, who was wondering what's going on. Dicky's other good friends Sammi, Andy Hui and his wife Jess Zhang were absent at his the party. 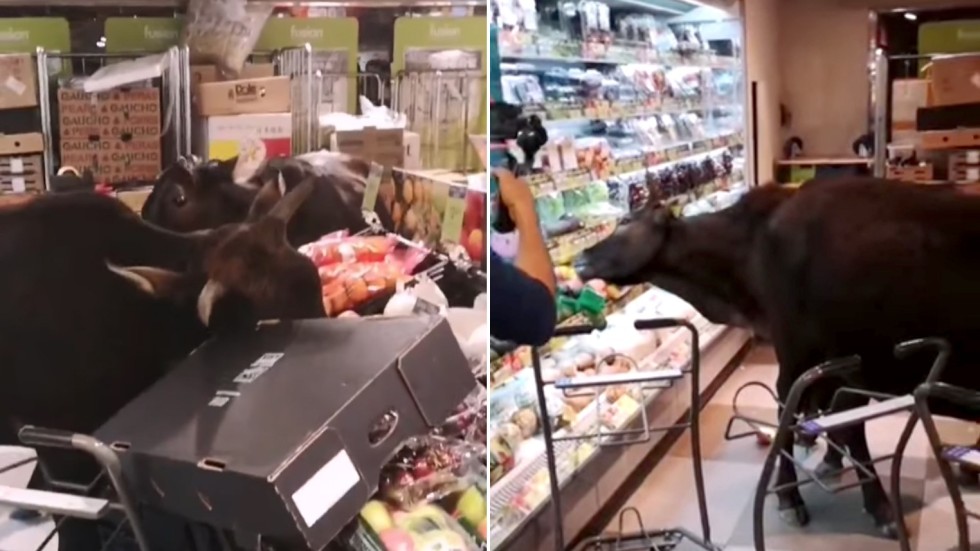 A supermarket on Lantau Island had some unexpected visitors on Thursday night, when a group of hungry bulls wandered the aisles and fed on fruit, prompting a concern group to call for more public awareness of diminishing grasslands and the dangers of humans feeding wild animals.

The bulls in Mui Wo, a rural town on the eastern coast of Lantau Island, stole the limelight as Hong Kong enters the Year of the Pig. At least three of the animals were filmed in a ParknShop outlet, enjoying a buffet of fruit displayed in cold storage units and on shelves close to the entrance.

The bovines munched on apples and cherries but ignored a banana held out by a customer. They reportedly lingered in the shop for a short while before leaving. The supermarket said staff notified police, and disposed of the contaminated produce before sterilising the affected area.

The video went viral on social media, with many seeing the funny side. But Ho Loy, chairwoman of the Lantau Buffalo Association said the film was a reminder of the plight of the island’s wild cattle, who had been affected by changes to their habitat. “A lot of farmland has been turned into soccer fields or warehouses in recent years. The bulls simply do not have enough room to rest and not enough grass to eat,” she said, adding that some grass areas had been polluted by illegal dumping of waste, which the government has failed to prosecute effectively. Ho also said that, as the number of tourists and residents has increased, the wild animals have become less inhibited and got used to humans feeding them.

She urged visitors to keep a distance from cattle and not to feed them human food. In November, an eight-year-old bull called Billy who lived on Pui O beach on the south of Lantau Island

A survey conducted by the government in 2013 revealed there were about 1,110 head of cattle and 120 head of buffalo distributed across Lantau Island, Sai Kung, Ma On Shan, and the central and north-eastern parts of the New Territories. According to Ho, there are 26 head of cattle and around 10 buffalo in Mui Wo, down from over 200 in the 1970s. If there is one memorable thing for Mat Yeung and Sisley Choi from filming their made-for-TV movie, "Police Story", it would be getting pepper sprayed during training.

As reported on Mingpao, the two stars, who spoke about the experience, stated that they wanted to know how it felt like before filming the scene, and decided to experience it themselves. "The producer supported our decision, but the police asked us to reconsider it because getting pepper sprayed is not the kind of experience that you would want," said Mat.

However, both he and Sisley persisted, saying that they want to do their role justice, as all PTU officers have to go through it. Said Sisley, the feeling of getting pepper sprayed is like no other, and it made worse by the fact that the training required her to read a large poster after getting sprayed. "I felt so dizzy and had to use all the energy I have to open my eyes and read it. When I went to wash my face, I really felt like I couldn't breathe," she said.

The actress added that her eyes were red and swollen for a day following the training. As for Mat, the actor said that he was a bit lucky as only his forehead was sprayed, but admitted that it still hurt. "It felt like my face had been washed with chilies," he added. 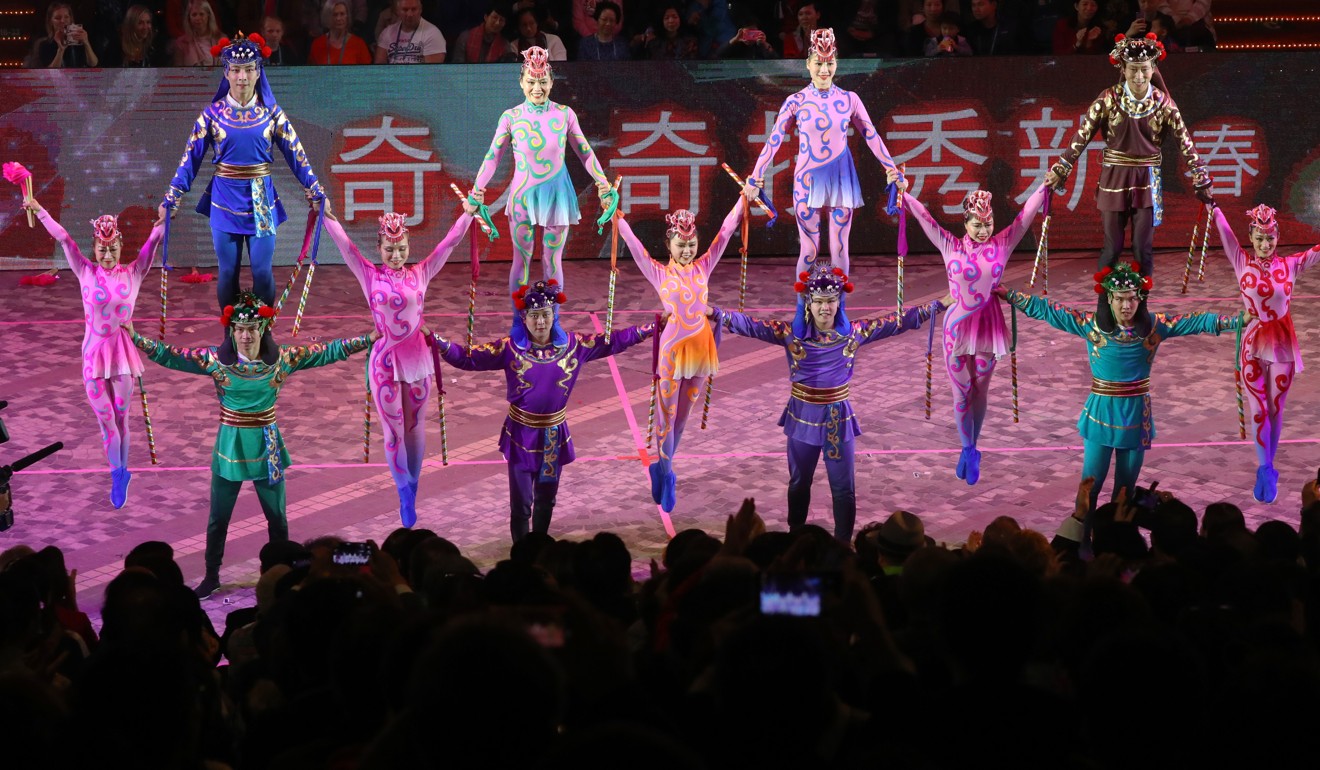 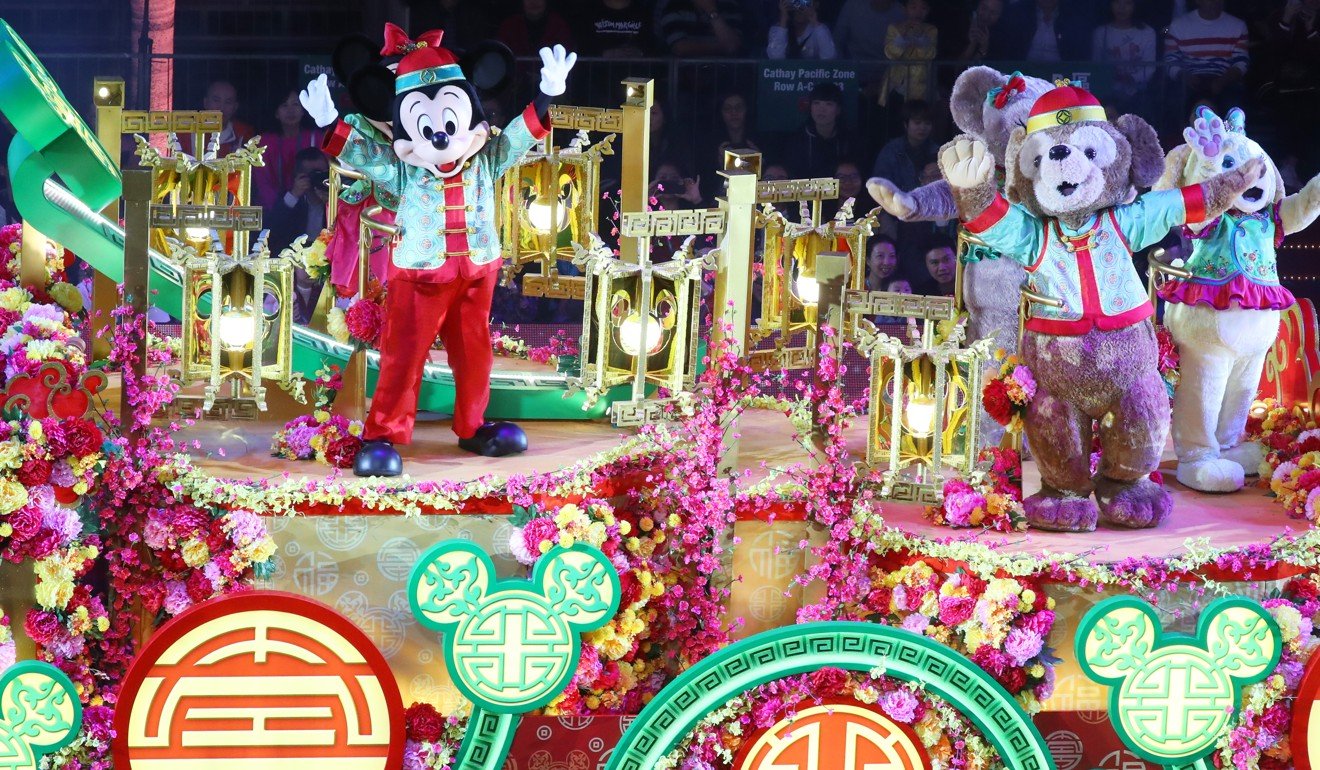 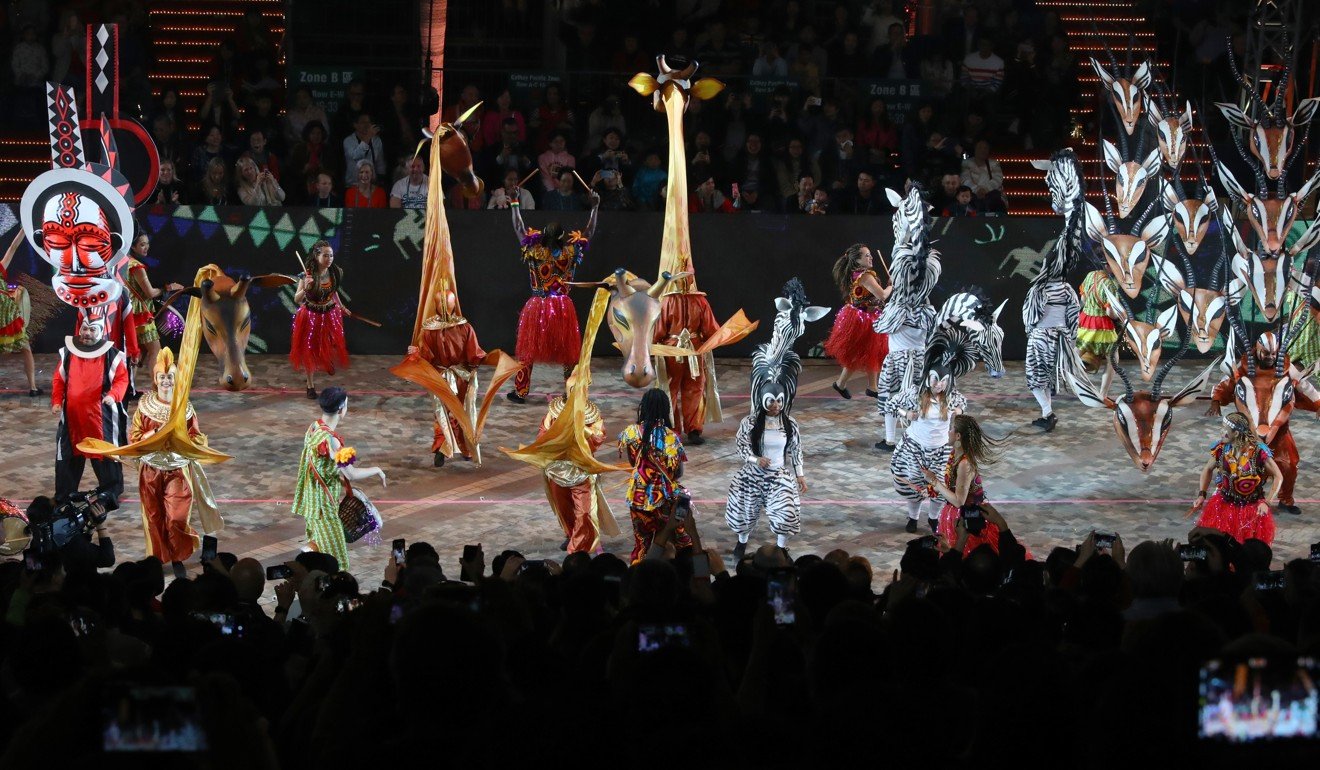 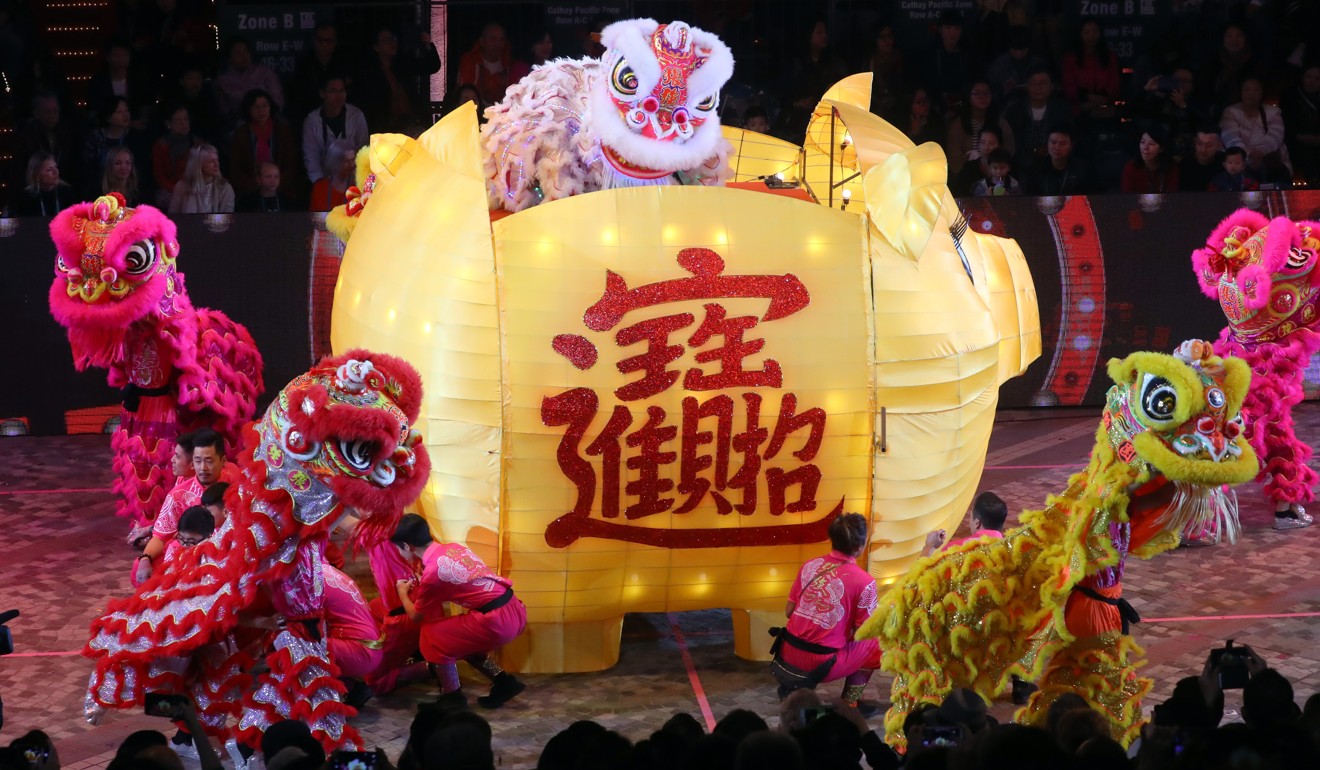 Tens of thousands of people lined the balmy streets along Tsim Sha Tsui to catch a glimpse of the annual Cathay Pacific Lunar New Year Night Parade. The annual extravaganza featured a glittering procession of nine sumptuously decorated carnival floats bearing messages of goodwill, luck and health for the coming Year of the Pig.
The carnival floats were packed with dancers and performing groups from across the city and international performers from the UK, Spain, South Korea, and beyond. Signature acts included a troupe of Cathay Pacific cabin crew who served up an energetic performance to wow the crowds early in the evening. Staff also handed out red lai see packets to the crowd.

Other highlights included a Hungarian basketball team, holding no fewer than 10 Guinness World Records, who impressed the crowds lining the streets of Tsim Sha Tsui with a variety of slam dunking moves and amazing trick shots.

Chief Executive Carrie Lam Cheng Yuet-ngor led the festival celebrations and wished all concerned a happy, healthy and rewarding Year of the Pig.